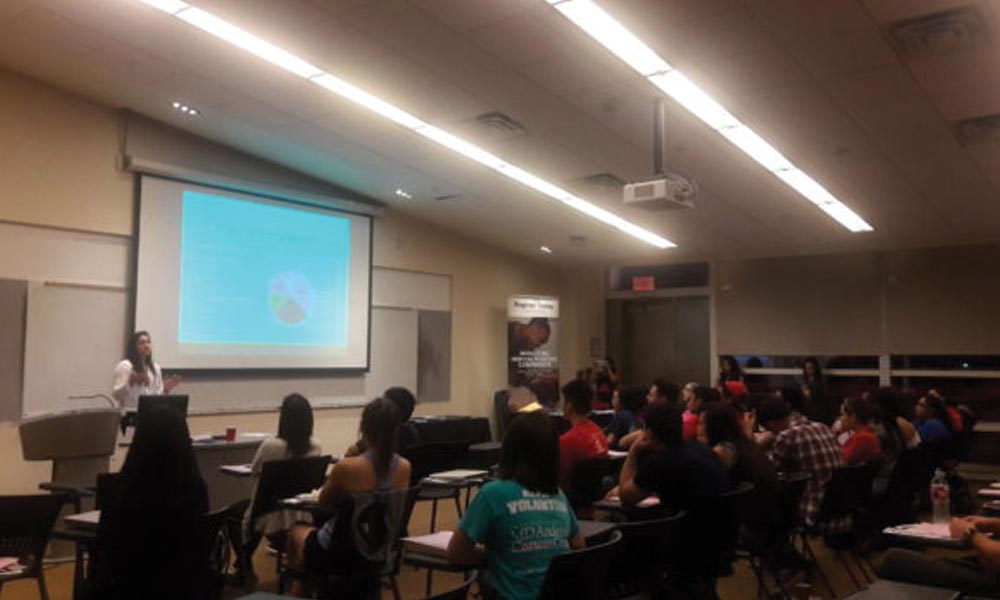 Physicians Against Human Trafficking, hosted by University of Houston students on Wednesday, aimed to educate future health professionals on combatting the issue that resurged  into the headlines with the Super Bowl LI festivities.

“I saw a big need for physicians to know about sex trafficking victims and how a lot of them just do not recognize that they are being abused, that they are being trafficked,” Vayon said. “And so I wanted to think of what I could do to help, and it starts with our pre-medical positions.”

On Wednesday, UH’s Modern Abolitionist Coalition hosted an event to educate pre-med students on how they can be proactive about human trafficking in their future professions. | Andrea Fernández Velázquez/The Cougar

Vayon added that she wanted to combine her passion for medicine and her desire to fight human trafficking.

The Houston-area organizations Mobilizing Medical Mission, United Against Human Trafficking, Doctors for Change and Unbound were present to guide and answer questions from students seeking information about the issue and how they can combat it.

”The sky is the limit,” said Misa Nguyen, the director of programs at United Against Human Trafficking. “There are a lot of people who are joining this movement, who are just ordinary
people who want to do something and make a difference and you can really be a part of something that is very grassroots. We all have our different roles that we can contribute to solving a problem like human trafficking.”

During her one-hour training presentation, physician and anti-human trafficking committee chair for Doctors for Change, Juhi Sain, informed students on the state of human trafficking in the medical field. She spoke on how to overcome the problem and what is being done, as well as the resources available to combat the issue.

“Whenever we think about sex trafficking, we think so far from us,” said psychology senior Samantha Rios, the president of HOSA at UH. “We think ‘it is in these bad areas of town, I may never see it, because I am here, I am in college’ and then you hear sex trafficking victims normally see health care providers instead of police officers.”

As a future physician, Rios said the event taught her to be more vigilant if she thinks there might be more to the story than physical illness.

“Hearing some of the statistics really put into perspective the severity of human trafficking, especially in Houston,” said UH alum Dennis Kunichoff, one of the co-founders of GHSI. “Seeing how many businesses operate undercover, behind the scenes as services or use labor trafficking was also very surprising and very good to know.”

Many in attendance said the event was an eye-opening experience and lesson for future health specialists.

“As a matter of awareness, it is good to know because you never know where you are and who you will be are around,” Kunichoff said. “Since I want to be in the health care field, having this body of knowledge can help prepare me to potentially save a life.”